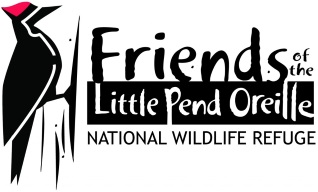 A small group with a lot of gusto describes the Friends of the Little Pend Oreille National Wildlife Refuge. Located in a rural, northwest corner of Washington State, this group has built a strong collaboration with refuge staff, and maintains consistent volunteers and about 100 members despite being in a small town.

The group was established in 2001, and since then has developed a robust environmental education program that reaches hundreds of nearby students each year.

The program, now more than a decade old, brings second graders and fifth graders onto the refuge. The younger students spend time exploring the 1.2 mile McDowell Marsh Environmental Education Trail, while the older students follow a customized educational program in line with their school district’s curriculum.

Price noted that despite living in a rural setting, some of the children have never been into a forest, on a picnic, or exposed to the outdoors beyond their schools playground.

The plan is to expand the program to more school districts, but to do that, they’ll need more funding.

Friends also helped create the McDowell Marsh Environmental Education Trail in 2007, and over the years have added additional interpretive signs and features to make the trail more interactive. Today, the trail features a universally accessible boardwalk over the marsh, self guided narrative brochures, an observation blind, and access to five ecological habitats found on the refuge.

Price also noted that visitation at the refuge has increased in recent years, from about 40,000 visitors five years ago to about 70,000 visitors today. He attributes the increase to better outreach efforts, and the varied events the refuge and Friends offer, including an annual butterfly count, an Earth Day cleanup, a mushroom foray and other festivals.